“Thought-provoking”, “worth the trip down”, “love the way you use the power of broadcast” – the response to Energy Live 2012 has been phenomenal. One attendee from Alfa Energy even […] 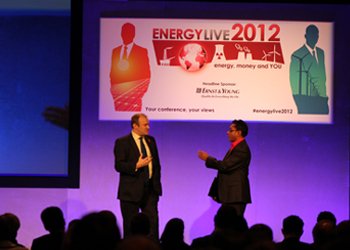 “Thought-provoking”, “worth the trip down”, “love the way you use the power of broadcast” – the response to Energy Live 2012 has been phenomenal. One attendee from Alfa Energy even tweeted: “If Carlsberg did energy events…”

With hundreds of tweets about the speakers’ comments, the buzz after the event spread to Twitter. One hailed the “refreshing ‘no slides’ approach” with another tweeting: “great event guys! Acknowledging major issues with a light touch of humour and healthy criticism. Love it!”

With the new Energy Bill due within days and energy users still coming to terms with the extra costs of carbon taxes like the Carbon Reduction Commitment (CRC), there was plenty to quiz speakers on.

Ed Davey faced down tough questions sent in by ELN readers on why the CRC was a “punitive tax” and even raised a few laughs, while E.ON’s Sara Vaughan admitted “trust is hard” and Scottish Power’s Neil Clitheroe made a pitch for B2B customers.

In a good-humoured jibe at the Big Six, Good Energy’s Juliet Davenport said the firm she founded was part of the “Challenger Seven”.

Playing to ELN’s strengths, the day’s presentations were peppered with amusing short films from ELN’s production house: whether it was a wry peek into the future if we ever found an energy source on the moon, to a look at the huge role that the anything but weaker sex could play in the sector – with giant women tending to power stations.

Sumit’s co-host for the day fellow former BBC reporter Emma Howard, fielded dozens of questions from the audience to those on-stage. Also chairing the Women in Energy debate, Emma prompted a sea of hands to rise, asking whether the men thought this was a worthwhile debate.