An artist is projecting a huge video artwork onto the roof of St Thomas’ Hospital, which is located across the river from the Houses of Parliament, to raise awareness about […] 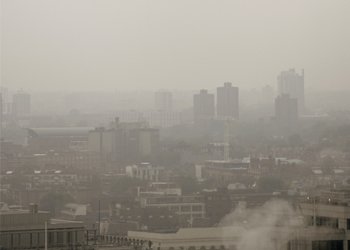 An artist is projecting a huge video artwork onto the roof of St Thomas’ Hospital, which is located across the river from the Houses of Parliament, to raise awareness about invisible air pollution.

After working with lung health scientists from King’s College London, British artist Dryden Goodwin created the animation to be shown on an eight-metre screen from dusk.

It will be visible every night until 28 October and pedestrians crossing Westminster Bridge will be able to watch the animation featuring more than 1,300 tiny pencil drawings by Goodwin of his 5-year-old son.

Called ‘Breathe’, the artwork is part of a programme of artists and scientist collaborations called Invisible Dust.

The projection coincides with a seminar looking at the risks to children posed by air quality, held by the parliament’s environmental watchdog, the Environmental Audit Committee yesterday.

MP Joan Walley, Chair of the Committee said: “We are determined to help promote public debate about this urgent public health problem. We are not likely to see, touch or feel a repeat of the Great Smog of London of 1952, but we can use these events to sound the wake-up call still urgently needed.”

She added there need to be “credible plans and strategies” across all government departments and more involvement with local authorities where transport policies can significantly shape local air quality, including bringing in Low Emissions Zones for cities beyond London.

Professor Frank Kelly, a KCL lung expert who worked with the artist has said scientists believe London air pollution could be as bad as it was before the 1956 Clean Air Act was passed.