Would you breach the Bribery Act to win new business?

UK businesses operating in the energy sector may be willing to breach the UK Bribery Act to win new contracts according to new research. While this mainly covers smaller bribes […] 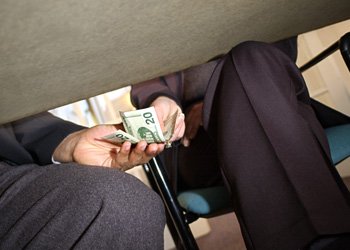 UK businesses operating in the energy sector may be willing to breach the UK Bribery Act to win new contracts according to new research.

While this mainly covers smaller bribes this could also include much larger bribes.

According to FTI Consulting, 40% of UK businesses surveyed think the current economic climate is encouraging risk taking around compliance with the new law which came in last year.

Researchers contacted 571 board-level, senior and middle management respondents in UK companies, with roughly 10% of these from the energy sector such as utilities and mining (not including metals).

Julian Glass, Managing Director of FTI Consulting told ELN: “The things people said their companies were doing included many ‘facilitation payments’, offering small payments to a government official to do something they’re meant to do be doing but effectively to speed it up. But they’re illegal under the Bribery Act.”

One in seven people know or suspect these payments have been made by their companies in the past year, he said.

“It’s less of a risk from purely the UK but [that changes] as soon as you go into to Eastern Europe, Africa, the Middle East.

“Corruption is considered to be a very serious issue. We’re not just talking about small facilitative payments.”

When it comes to large-scale bribery, companies can face an “unlimited fine”, he said, although in practice this is unlikely to be the case, but “recent judicial comments on it have said fines should be in the tens of millions”.

He pointed to instances in the United States where at least six firms in the oil services sector had been given a total of $236.5million worth of fines. The USA has a similar legal stance on bribery to the UK.