The Deputy Prime Minster Nick Clegg today said his party would force their Coalition colleagues to stick to promises about “going green”. In a speech at the Lib Dem conference […] 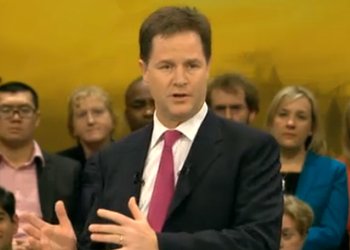 The Deputy Prime Minster Nick Clegg today said his party would force their Coalition colleagues to stick to promises about “going green”.

In a speech at the Lib Dem conference in Brighton which will surely stoke government tensions over spending on renewable energy, Mr Clegg suggested using energy forms like wind, solar and tidal power would help push Britain out of debt while creating a “new economy for the new century”.

In direct contrast to George Osborne’s comments at the Tory Party conference last Autumn, when the Chancellor suggested we won’t “save the planet by putting our country out of business”, today the Lib Dem leader declared: “Going green means going for growth.”

Slamming “short-sighted arguments” that we have to choose between the two, Mr Clegg spoke about the “fantastic economic opportunity” promised by decarbonising the UK.

He said: “The green economy in Britain is growing strongly right now, bringing in billions of pounds and creating thousands of jobs – in wind, solar and tidal energy; the technologies that will power our economy in the decades to come.”

Mocking his Coalition partners’ “PR exercise” on the environment, which called to mind Prime Minister David Cameron’s photo-call hugging a husky, Nick Clegg scoffed: “There was a time when it looked like [the Conservatives] got it… Until, at last year’s party conference, they went and ruined it all, admitting that you can’t in fact ‘vote blue and go green’.

“Well of course you can’t. To make blue go green you have to add yellow, and that’s exactly what we’re doing.”