We’ve seen glasses which become tinted when it gets sunnier – now we could soon be seeing windows which do the very same thing. Scientists believe new “glass architecture” technology […] 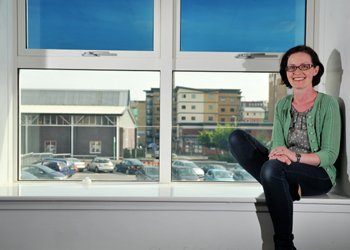 We’ve seen glasses which become tinted when it gets sunnier – now we could soon be seeing windows which do the very same thing.

Scientists believe new “glass architecture” technology could save the offices, schools and hospitals of the future a fifth of their energy use.

The electronic glazing system darkens windows ‘at the touch of a button’, according to researchers at De Montfort University which is testing the technology in two office buildings (pictured).

Made by SAGE Electrochromics in the United States, the special ceramic coating can vary the level of tint when a small electric voltage is applied.

The Leicester-based researchers are possibly the first in the work to look at whether the system changes the workers’ use of air conditioning when offices get warm over an extended period of time.

Dr Birgit Painter who is co-ordinating the project said: “Window blinds that are typically used to control daylight are often left down so that occupants lose the benefits of daylight and views – this is known as “blinds down, lights on” syndrome. Electrochromic glazing could address this issue, as well as reducing reliance on electric lighting and air conditioning.

“The windows can be controlled manually or automatically, with the control settings tailored to the application. And unlike blinds, the glazing still gives the occupants a view outside.”

Ruth Kelly, a PhD student working on the project added: “Studies have shown that electrochromic glazing could save 23% on daily electricity usage for lighting.”