Volker Beckers and Paul Golby, the CEOs of npower and Eon, have said yesterday’s Ofgem report was unfair and the regulator’s relationship with the power companies is poor and getting […] 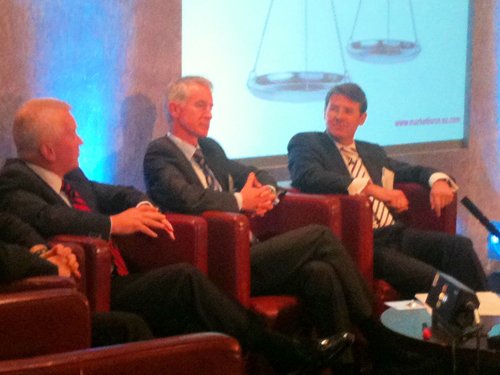 Volker Beckers and Paul Golby, the CEOs of npower and Eon, have said yesterday’s Ofgem report was unfair and the regulator’s relationship with the power companies is poor and getting worse.

Speaking at the Marketforce Future of Utilities Conference in central London this morning, Dr Golby said Ofgem was part of the reason customers had lost trust with the big six:”The relationship has to change. I’m sick and tired of threats from the competition commission from Ofgem, it’s time we were more constructive.”

Dr Golby also questioned if the relationship with Ofgem boss Alaistair Buchanan had run its course: “After 8 years of saying the relationship isn’t working you have you have to ask is that my fault or is the regulator not working?”

Npower CEO Volker Beckers also said yesterday’s report was more stick than carrot: “Trust is the key for us to make the investments needed trust between the regulator, customers and suppliers. Right now it feels like just a big stick.

“Yesterdays report made no mention of the 50% drop in customer complaints as for pricing we are so open and transparent here in the UK. And we are not largely profitable. I wonder if the move of Ofgem from setting regulations to being a policeman is wrong.”

Yesterday Ofgem said the Big Six had over-complicated pricing tariffs and should have some of their generation capacity broken up and offered to smaller players.

Dr Golby said things had to change: “Its clear our customers don’t trust us, in fact energy companies are only slightly above politicians in the public’s view.

“We must stop this and need a constructive relationship if we can’t do that then there’s no role for a regulator.”