Today SSE Interconnector, a subsidiary of SSE signed a deal with Norwegian and Swedish companies to start testing the prospects of an underwater power cable between Norway and Scotland. SSE, […] 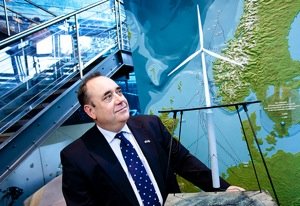 Today SSE Interconnector, a subsidiary of SSE signed a deal with Norwegian and Swedish companies to start testing the prospects of an underwater power cable between Norway and Scotland.

SSE, Adger Energi, E-Co Energi and Lyse from Norway and Sweden’s Vattenfall have teamed up to form a joint venture called NorthConnect. It’s this company that has been given a £42,500 development grant to look into the prospects of linking the countries power networks together.

They aim to build an interconnector – a high voltage cable that would enable electricity to flow in both directions between Scotland and Norway. The UK already has two interconnectors that link with Europe, one based in the South East of England and another in Norfolk. This would be Scotland’s first and today’s news was welcomed by First Minister Alex Salmond.

He said: “Scotland is ideally placed to become the green powerhouse of Europe, with a practical offshore renewables resource estimated at 206GW – just one third of which could generate electricity to meet the needs of more than 36 million households far beyond our shores.

“Today’s agreement represents a major early step toward the integration of Scotland’s electricity network into a pan-European grid.”

The research money is a tiny fraction of what the interconnector may actually cost. Some academics argue this could be a potential stumbling block.

Dr Keith Bell, an energy expert at the University of Strathclyde told ELN “The cost is the biggest weakness in this. For a 2GW connection, you might be talking roughly £1 billion to build an interconnector.” However once running they can be self sustaining. “The longest high voltage cable in the world, between the Netherlands and Norway, has effectively paid for itself already within two years.”

Dr Bell added reliability of cables is mixed: “The Netherlands to Norway interconnector has had some problems however the one between the south east and southern France has been very reliable.”

The news of this research adds fuel to moves towards the creation of a European Supergrid, an idea backed by the Prime Minister last month.