Despite the snow 2010 was hot to trot 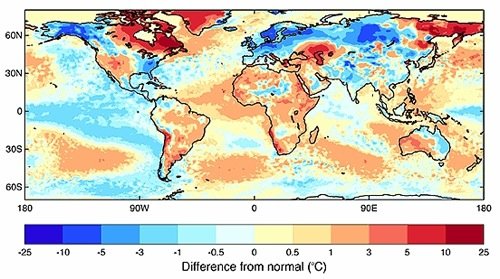 The data published by the Met Office and the University of East Anglia today confirmed figures released earlier this month by NASA’s Goddard Institute for Space Studies which said 2010 was either warmest or equal-warmest.

The UK may have shivered in two huge bouts of snow, infact we had the coldest year since 1986, but globally large weather events in the Pacific called El Niño conditions really hiked temperatures up. Dr Adam Scaife, head of long range forecasting at the Met Office, said: “The three leading global temperature datasets show that 2010 is clearly warmer than 2009. They also show that 2010 is the warmest or second warmest year on record as suggested in the Met Office’s annual forecast of global temperature issued in December 2009.

2010 was a year of headline-making weather. In the summer there were extremes such as the Russian heatwave and the floods in Pakistan and China. At the end of the year many areas across Northern Europe experienced heavy snowfalls and very low temperatures, while eastern Australia saw extensive flooding which has continued into this year.

Although specific weather systems did affect temperatures, there is a general upward trend this century in temperature around the world.

Commenting on this global trend Friends of the Earth campaigner Craig Bennett said: “We may have been trudging through deep snow last month, but these figures show there’s an enormous difference between climate and weather – despite the efforts of some to claim that global warming is a myth.”