Boris sees London at the forefront of the green revolution

Mayor of London, Boris Johnson, stressed the importance of honouring the capital’s reputation as a leading global city by making it one of the greenest: “It is my ambition to […] 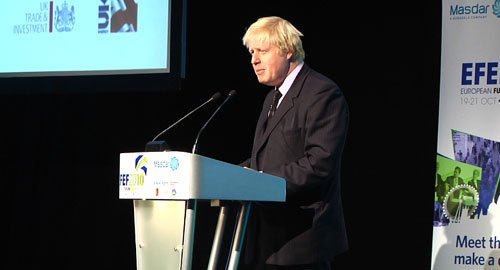 Mayor of London, Boris Johnson, stressed the importance of honouring the capital’s reputation as a leading global city by making it one of the greenest:

“It is my ambition to make our city a world leader in low carbon technologies and to reduce our CO2 output by 60% by 2025.”

Speaking at the European Future Energy Forum at the Excel centre, he outlined key developments to infrastructure to decentralise energy and recreate London as a cleaner city:

The Mayor spoke proudly of the city’s illustrious past and explained that London was rebalancing in the 21st century: “The lessons learnt are not to recreate past successes but we must recreate the conditions for the new economy.”

As part of this new economy, the Mayor was keen to impress upon his audience London’s credentials. After telling attendees of a £600 million green fund he had put in place he issued a staunch challenge for investment:

“Where there’s muck there’s brass. It’ll be London technologies that will address the problems of global warming. I see no reason why this technology should not be financed here, marketed here, even invented here. London is the home of scientific innovation.”