The GDA is the safety assessment process that all new nuclear power stations must go through in the UK. It’s a paper blueprint for safety looking at all the issues […] 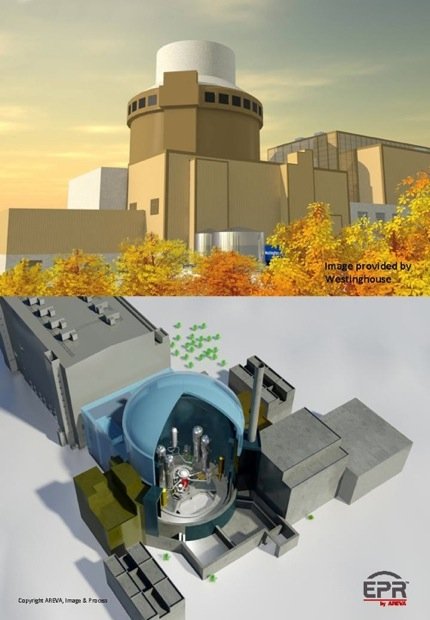 The GDA is the safety assessment process that all new nuclear power stations must go through in the UK. It’s a paper blueprint for safety looking at all the issues involved in nuclear power from reactor chemistry to building design and radioactive discharge and is a joint investigation by the Health and Safety Executive and the Environment Agency.

It’s due to be completed by June next year and is now entering Step 4 of its assessment process. The latest report published this week identified several areas that needed work.

There are two main reactor designs being looked at the Westinghouse AP1000 which is being built on behalf of Horizon Nuclear Power a conglomeration between E.On and RWE and the EDF and AREVA EPR.

The main issues identified in the latest report are as follows;

For the Westinghouse AP1000

Civil Engineering – basically the steel structure making up a shield building protecting the reactor. The report says its not convinced its safe and robust enough and has flagged it as an RI (regulatory issue – which means it could scupper the whole application). Westinghouse now has until October to submit a redesign.

Squib Valves – these are safety valves that lock down when a reactor is unsafe, a bit like air bags in a car. But how can you test something that’s only designed to work once? The report is not convinced they are suitable for the AP1000.

Controls – Westinghouse has “a considerable amount of work to do to produce an adequate safety case for the complex control and instrumentation systems proposed” says the report.

Reactor chemistry – The regulators want more details on how this will work and what tests Westinghouse has done to prove their science is robust.

For the EDF and AREVA EPR

Control and Instrumentation – This has also received an RI notice. Here the GDA inspectors are concerned that the processes are ” too complex” and questioned the high level of reliability boasted by EDF and AREVA. They have until the end of this month to submit changes.

Human Factors – the report said it was “being hampered by lack of evidence to support claims about the relevant risk contribution from human actions” ie the plans hadn’t taken into account human error in its design.

Design codes – concern was raised that the levels of build quality that were acceptable in France may not be suitable in the UK and more clarity was needed.

Both designs have work to do and submissions to make before the end of the next stage of the assessment process can be completed. The man in charge of ensuring they do is Kevin Allars the GDA regulator, he admitted these issues are to be expected as neither of these reactors actually operate anywhere in the world.

He told ELN, “I’m confident they can do it but they have not got the safety right as yet. That’s not surprising as neither of them have ever been in operation. The AP100 is being built in across several sites in China but is not on stream and the EPR is a new version of reactors and it too is nearing completion in France and is under construction in Finland but not in operation.”

The report looks at the period Jan to March this year and Mr Allars admitted things have improved and moved on since then. The next GDA report is actually published on Monday 28th June when the Environment Agency reports its findings on environmental and radioactive waste matters.

If the GDA is successful the final report will be made in June 2011 with construction of the first new power stations due to begin late 2012.

For more details and the full report go to www.hse.gov.uk/newreactors